It is Halloween time, and it reminds me of one of the great stories in my family.  It provided us with an excellent life lesson.

It was in October 2016.  My youngest daughter, Sara, was a senior in High School.  It was a Saturday, and the two of us were looking for something to do.

We decided to carve pumpkins.

I opted to go for the traditional Jack-O-lantern look.  You know the one.  Two eyes are not relatively level.  An off-center nose.  A smiling mouth with missing teeth.

Sara wanted to do something fun and unique.  She found a pattern for a minion.  You know, the character from Despicable Me.

We got our knives and started carving.  After about an hour, we were done.  Mine looked great, classic.  It was one of the best craft projects of my life, which doesn’t say much.   Sara’s looked sad.  Frankly, I was worried she would start to cry.  She was 18 and tough mentally, but her pumpkin appeared to be a failure. As you can see from the photos included, Sara tried to make the most of it.  But her face shows her disappointment.

Then night time came, and we decided to put a light inside our pumpkins.  The light transformed Sara’s pumpkins into one of the coolest I had ever seen.  (Mine looked the same, typical). Again see the photo included.

Needless to say, the next move was to put the pumpkins on the front porch.

The story works for so many lessons.

-Don’t judge something by its outward appearance.

-Put a light inside of something (or somebody), and its true beauty will come out.

-Don’t be too quick to give up on something (or someone).

This little event changed the way our family looks at life.

Take advantage of your time inside this fall.  Carve a pumpkin with someone.  Try for something unique.

Better yet, while you’re carving pumpkins, say or do something positive to the people around you.  It will put some light inside of them and cause you to see what is beautiful about them. 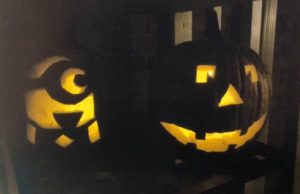