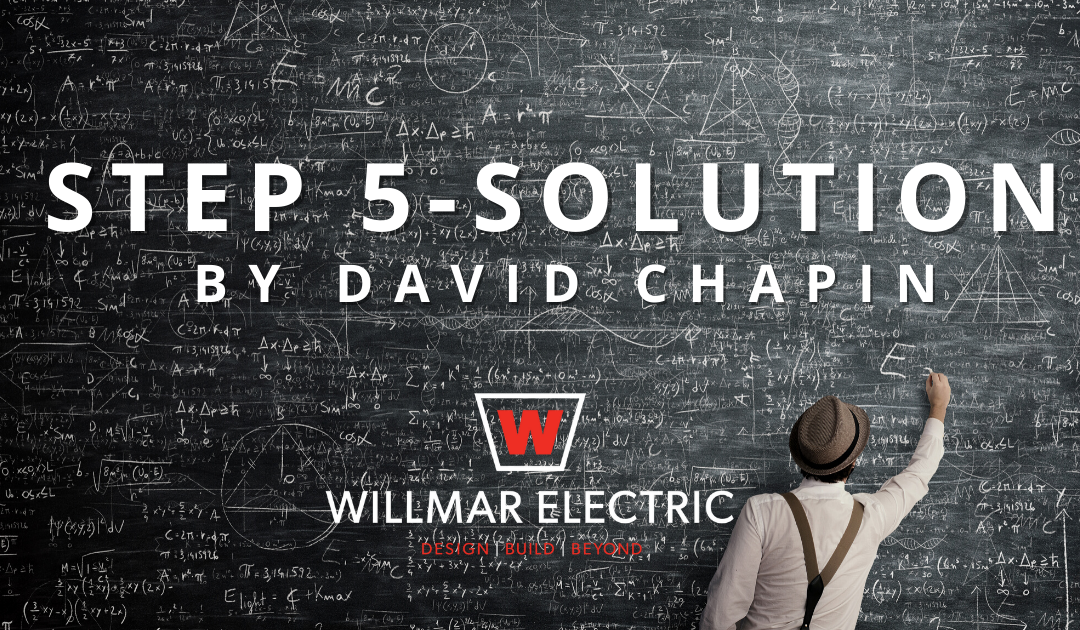 Last month I blogged about productive confrontation from a class we developed at Willmar Electric. I outlined a five-step process.

This is the fifth and last installment.

If your job is to manage people and help them grow professionally, you need to give them feedback. Feedback both negatively and positively. Providing people feedback lets them know where they are doing well and where that need to improve or change.

Of course, how you give feedback makes all the difference in the world. So, I came up with a 5-step process for the situation that involves a confrontation. I hope I’m not plagiarizing. But if you recognize my list and think I should give credit to somebody, please let me know.

The first fours steps are trust, respect, self-awareness, and keeping your focus. We end with finding a solution.

If you don’t come up with a solution to your confrontation, you don’t make progress. You risk moving in the wrong direction because you identified an issue but choose to do nothing about it. When you take the route of doing nothing, you send the signal to ignore problems. Henry Ford warned us, “Most people spend more time and energy going around problems than in trying to solve them.” Not good.

It is up to the people involved in the productive confrontation to develop a solution or path forward.

By this time in the engagement, the problem should be identified. But finding a solution isn’t always easy. Albert Einstein is credited with pointing out, “A problem can’t be solved by the same kind of thinking that has created them.”

Unique situations are going to take a unique solution. Psychologist and dog “trainer” Abraham Maslow said something similar when he cautioned us, “If you only have a hammer, you tend to see every problem as a nail.” So, you need to make sure you aren’t hammering the solution into each situation.

Finding a solution takes determination. Einstein told us, “It’s not that I’m so smart, it’s just that I stay with problems longer.” Do the hard work of sticking with the issue long enough to bring it to resolution. It will be worth the effort.

If you have been using steps one through four, you should still have an open mind at this part of the dialog.

We are discussing a professional situation, so a resolution is needed. In a professional situation, failure to address something always affects more people than the two involved. A lack of finding a solution could impact coworkers, customers, or vendors. (My advice is meant for business settings. At the same time, I’m not suggesting you ignore issues in a personal setting. That is up to you. As you might guess, I tend always to resolve personal conflict as well.)

The entire reason for bringing up an issue is to resolve the problem.

Keep in mind where the process of productive confrontation started, you had either a situation you needed to fix, or you had a situation you couldn’t allow to happen again. This final step is to develop a plan to keep it from happening again.

Be patient in coming up with a solution. Tyrant and dictator Joseph Stalin said, “death is the solution to all problems. No man – no problem.” Although technically correct, Stalin is overreacting.

One of the reasons for taking this cycle to an end is to make sure both people are on the same page. English writer and philosopher Gilbert K Chesterton pointed out, “It isn’t that they can’t see the solution. It is that they can’t see the problem.” So as you approach the end of the process, you often find the other people aren’t moving as fast as you. You need to back up and make sure they understand the issue. If you don’t, they may very likely end the process bitter or unwilling to accept the solution.

Now that a solution has been agreed on, make sure you following Stephen Covey’s advice, and you are “part of the solution, not part of the problem.” You should be looking and living forward.  Make it clear through your words and actions you’re not holding the past against the other person, and they are not going to repeat the past. Covey also said, “Make small commitments and keep them. Be a light, not a judge. Be a model, not a critic.” By following Covey’s advice, you’re going back to the top of the five-step process. You are building trust and showing respect.

Don’t worry about whether the other person is going to hold up their end of the solution.  Bill Gates says he believes “if you show people the problems and you show them the solutions, they will be moved to act.” If for some reason, the other person doesn’t live up to their end of the solution, you will need a second productive confrontation.  Except for this time, the issue at hand will be their breaking your trust. Your challenge in the next confrontation will be to stay focused on the new topic at hand, breaking an agreement, rather than going be and rehashing the original issue.

Again, let me close by saying trust, respect, self-awareness, focus, and solution are the five keys to a productive confrontation. We don’t need to seek out confrontation in the workplace, but we can’t run from confrontation once we move into a leadership role if we want to be effective leaders.

Hopefully, this collection of blogs help people take action and have more productive confrontations. Hopefully, it leads people to move forward hand and hand toward success in the business.

“Each Warrior wants to leave the mark of his will, his signature, on important acts he touches. This is not the voice of ego but of the human spirit, rising up and declaring that it has something to contribute to the solution of the hardest problems, no matter how vexing!“ – Pat Riley (9 time NBA Champion Basketball Player, Coach, and Executive)