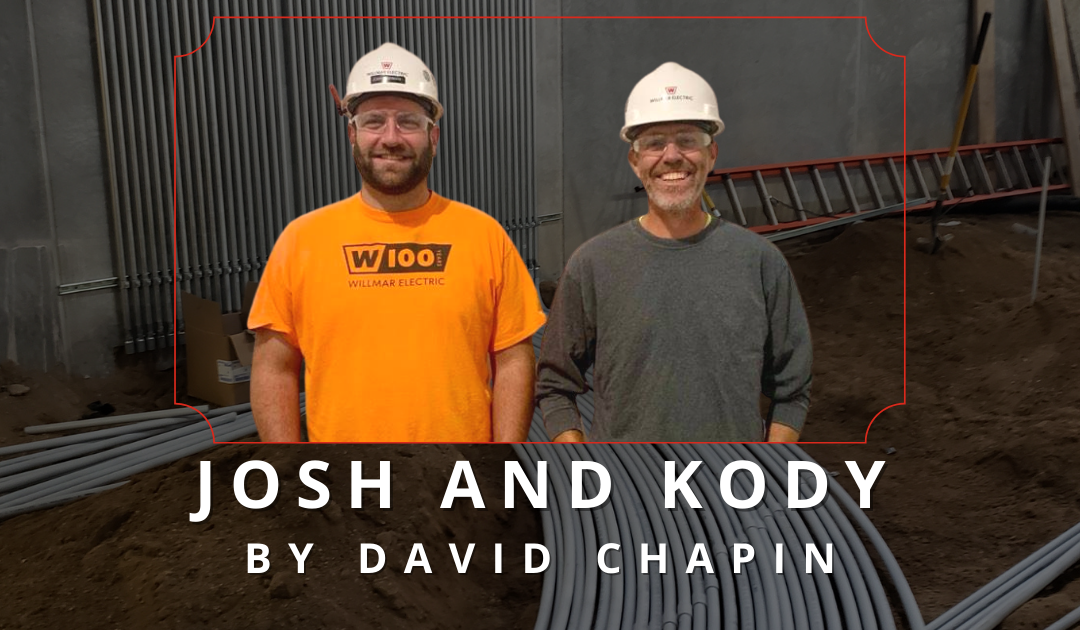 Our company is 101 years old. We have had a lot of great events and key dates in our 101 years.

Often, I post about those critical days. I have highlighted the birthdays of past owners. I have pointed out awards we have received and projects we were awarded.

But today, I want to highlight a day that when it happened seemed like a routine day.

The date was August 13, 2001. We were busy. The workload was heavy, especially in Lincoln, Nebraska. So, we were hiring.

On this key day in our history, we hired two people, Josh Dishman and Kody Rising. They were friends before they applied. They remain friends, today.

They went to trade school together.

They have a lot of similarities. Both from small towns in Central Nebraska, Josh from Gothenburg, and Kody from Sutherland. Both are loyal to Willmar Electric, their projects, and the people they work with every day. Both are leaders. Both value hard work. If you work beside them, expect to give everything you have to the team’s efforts.

Most importantly, they both put family first.

But they have some differences. Josh is quiet, Kody is loud. They are both willing to offer their opinion, but one needs to be asked before giving it. Josh loves to smile. Kody loves to tell stories.

They work well together. Josh and Kody build off each other’s strengths. Over the years, Kody has become Josh’s supervisor.

Kody frequently tells me how important Josh is to Willmar Electric. (I’m sure Josh reciprocates the same feelings, but keep in mind he shares less than Kody.) Anybody who knows them understands how important they are to each other.

As both are quick to point out, Josh holds seniority over Kody. The story around the office is Josh turned in his paperwork quicker. (I think the real reason is Dishman comes before Rising in the alphabet, so we entered him in the database first, but we let the paperwork story live on).

I would have no idea if they intended to come to work at Willmar Electric if only they both got job offers. Since they started, they have never presented themselves as a package deal. But we are all glad they came together.

We wouldn’t be the same if we didn’t hire these two. Josh and Kody changed our history. The number of people they have positively impacted during their twenty years is too many to count.

To have two Hall of Fame coworkers start on the exact same day is a big deal.

Without a doubt, one of the best days we ever had at Willmar Electric is August 13, 2001.

Thank you, Josh and Kody, for all you do.