All That and a Box of Chocolates 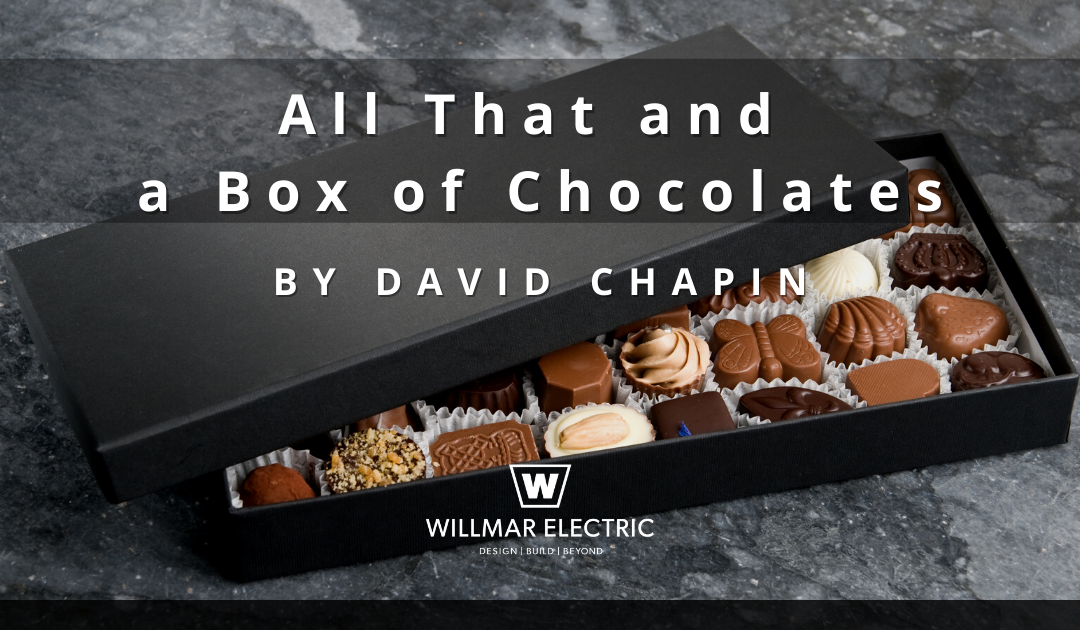 February 10th, when I opened my Wall Street Journal (WSJ), I noticed in their Opinion section an article by my friend Ben Brubeck titled “Infrastructure Law Becomes a Biden Giveaway.”

Wow.  Isn’t he cool.  Ben Brubeck made the WSJ.  He didn’t get the ultimate status of a WSJ pencil scratch.  But he got an article in “THE JOURNAL.”

It reminded me of a Chapin family dinner conversation about 10 years ago.  After returning home from a trip to Washington DC, I started talking about a dinner I had during my trip.  I don’t recall the reason for the story, but I remember saying, “I was sitting next to Ben Brubeck.  “

Our son, Mike, who was in High School at the time, said, “you know Ben Brubeck?”

Let’s back up a step and explain who Ben Brubeck is in real life.  Ben is the vice president of regulatory, labor, and state affairs for Associated Builders and Contractors (ABC).  At the time of Chapin’s family dinner conversation, he was a junior member of the ABC staff, but he had written some things online my son had found while researching a school paper.

I considered Ben a friend, a wonderful person to sit by at dinner, and one of the world’s foremost experts on why Project Labor Agreements (PLAs) are a terrible public policy.  I didn’t consider him to be a celebrity.  Don’t get me wrong.  Great husband, father, champion of the merit shop, and maybe a genius but not a celebrity.

On the other hand, Mike did give him at least some minor celebrity status.

The interesting thing about Ben is that he knows all about celebrity status.  He is the grandson of the late great Dave Brubeck.

Until I met Ben, I didn’t know Dave Brubeck from Adam.  I don’t listen to very much Jazz music.  (I have since learned The Dave Brubeck Quartet’s recording of the song “Take Five” is still the number one selling jazz recording of all time.)

If you go to a meeting with Ben when he introduces himself to somebody, he often gets asked somethings like “Brubeck, as in Dave Brubeck?” Ben answers by telling them Dave Brubeck is his grandfather.

We all get this from time to time.  I got it all the time when I was running for public office.  I was told, “your uncle Donny was quite the high school football player,” “your aunt Julie is my best friend,” and “your aunt Lois makes the best candies.”

But, unlike the Brubeck family, the Kennedy Center has never had an event honoring any member of my family.[1]

Coincidently in my last conversation with Ben, he called me a celebrity.  I laughed asked why he drank during the day.  He laughed and told me that I was a celebrity as far as he was concerned.

Is everyone a celebrity?

I certainly don’t think I am a celebrity.

People tend to treat celebrities special.  I don’t.  To me, people are people.

Two days later, on a visit to the same Congressman’s office, he acted like we had never met.  But I’m convinced he remember the rude person who dared to ask Martin Olaf Sabo who he was.

On a podcast today, a cohost mentioned how awesome it was that somebody “didn’t act like a celebrity and was just a regular guy.”  Shouldn’t we all act like regular people all the time?

Ben has his mom, my son, me, and countless others.  I have my parents, son, wife, Ben, and Vance Walter.  Dave Brubeck has the entire Jazz world and Ben.

But rather than putting someone, I don’t really know on a pedestal, I should honor the people around me like they have celebrity status.  Stop taking people for granted.

Today I consider Ben Brubeck a hero because he was in the Journal.  But really, my opinion of him didn’t change overnight.[2]

Just like if you spend time with Ben, you find out his affection for Dave Brubeck has nothing to do with jazz.

[1] Because it is February, I should point out neither Ben nor his grandfather was born in February, so it is hard to believe it is possible either the greatest ever at what they do.  I understand it is possible in theory, but in practice, it is improbable.

[2] It should be noted Ben is a Yankee fan, so I can be friends with people with character flaws.