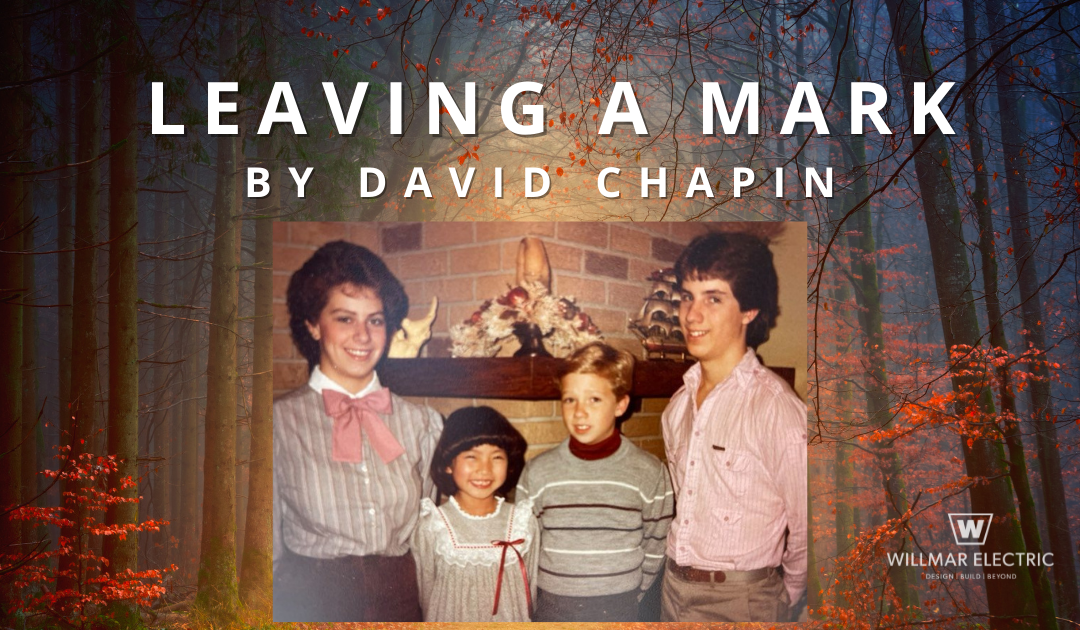 When I was in elementary school and junior high, our family lived on a few acres north of Willmar, Minnesota.  The entire property was full of trees.  (That’s right, I am so old I lived in a world before middle schools were invented).

Next door to our house was a clearing; the Reese family lived there.  Our family used the clearing to play sports of all kinds.  Between our houses was a little shortcut through a relatively dense set of trees and brush.

One of the most memorable events at this house happened while walking from our house to the clearing next door.  My younger sister, Allison, and I were walking through the woods when she hollered out, “ouch.” I turned to notice she was bleeding slightly.  Very slightly.

The thorn that had scratched her face appeared to hurt more than it cut.  I could see a cut of about an inch, maybe a little longer.  It was a perfectly straight line.  But only a couple of tiny drops of blood appeared.  So small they didn’t even run down her cheek.  They set on her face like tiny bubbles.

To this day, I can remember wiping the droplets of blood away.  The scratch didn’t need a Band-Aid, it was hardly even noticeable.

She said, ouch, I wiped the blood off (and then on my pants), and we moved on.

I can’t even tell you why we would be walking through the woods that day.  She was about 3 or 4 at the time.  That meant I was about 11 or 12. And, although Allison and I have always gotten along, I wasn’t some super brother who, at the age of 12, included my 4-year old sister in my sporting activities.

But the mark on Allison’s face remained there for decades.  As she grew older, the mark stayed.  She grew into a pretty young lady.  Many people might never have noticed the mark.  It may still be there today, for all I know.  Under the left eye mid cheek.

But I can see it.

I may be the only person who noticed.  I’ve never heard anybody mention it.  But I could see it.  Allison and our mom remember it.

The moment and the scar have always served me as a reminder that even a seemingly minor thing can leave a mark.  It might only be the people involved who remember.

So how often does this happen?

Although, in this case, I didn’t cause the injury, but how often have I done something to other people that have left a mark?  Far too often.

At times I have immediately addressed my mistake and apologized.  (Wiped away the blood).   But I couldn’t eliminate the mark.

One of our values at Willmar Electric is to Treat Others the Way You want to be Treated.  If I am living up to this value, my actions aren’t leaving marks.