Always on the Sunnyside 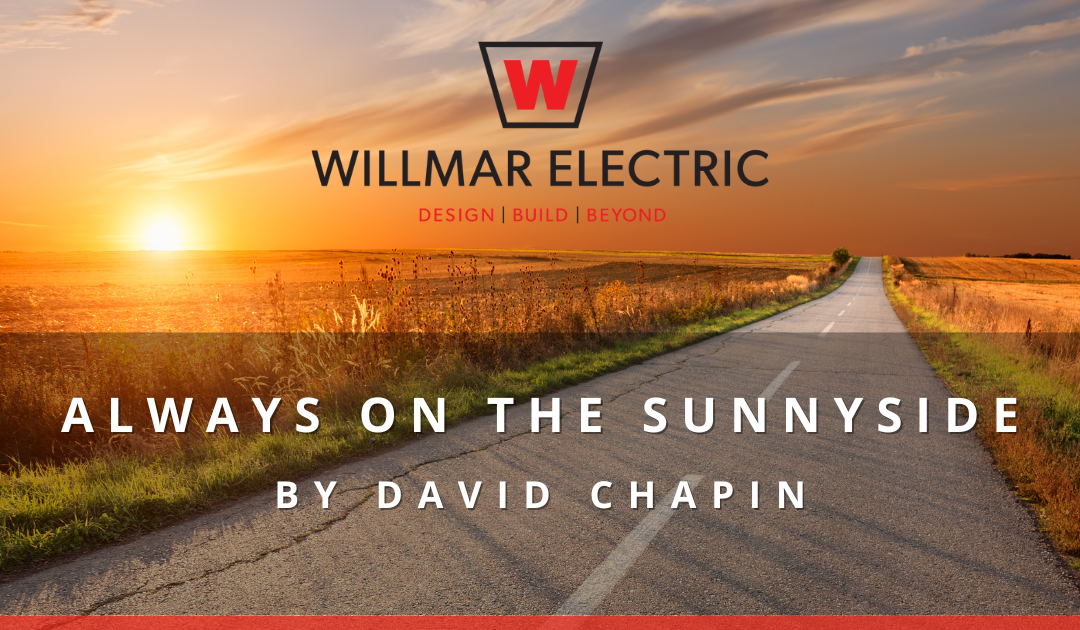 A few months ago, I was asked to speak to a group of leaders from another firm. The topic was leadership style. I spoke and answered questions. I mentioned a handful of techniques and tools I use to get through life.

Recently the firm’s CEO, Kyle, told me people not only enjoyed the session but a few of the techniques had become popular.

I was interested in learning from all my advice which had the most significant effect.

He said the “eating the frog” part had the most significant effect.

Then, a mutual friend, Greg, stepped in and said, “Dave didn’t come up with that on his own. There is a book with that title.” I told them I hadn’t invented anything I mentioned in my session with Kyle’s coworker. During the session, I told everybody all my material was taken from others.

Regarding eating the frog, during the session, I mentioned it was first said by Mark Twain.  Twain said, “If the first thing you do in the morning is to eat the frog, then you can continue your day with the satisfaction of knowing that this is probably the worst thing that will happen to you all day.”

As Greg had mentioned, the phrase Inspired Brian Tracey to publish a book in 2013 titled, “Eat the Frog.”

Another friend, Chuck, reminded me there are no new ideas. He pointed out how his idea about there being no new ideas isn’t even a new idea. Chuck pointed me toward the Bible’s book of Ecclesiastes in chapter 1, verse 9, “what has been is what will be done, and there is nothing new under the sun.”

I find often forget where I even learned most of what I know. When I can, I think it is essential I give credit to the right person, but often the practice has become such a habit I don’t remember its origins.

I recently met with a group of peers from around the country. The group has met for decades, but we recently added a member.  During our time together, I brought up something the group called the “conduit board.” When the new guy asked us what a conduit board is, one of the group’s long-time members said, “Chapin has a board they use for training and testing all the different conduit bends.”  He closed by telling me, “you should send your instructions on how to make it.”

The fantastic thing about the conversation is the long-time peer group member gave my company credit for something his company invented. The conduit board had become so ingrained into the group’s thinking that we had all forgotten who invented it. Even its inventor!

(It is often said about half of what we give Mark Twain credit for saying was really said by somebody else. I’d guess if we could ask him, he would agree and tell us the other half was things he had heard others say first.)

Later during my time with Greg, we went golfing. When something went poorly during the round, Greg sang the chorus to “Always on the Sunnyside” to me.  He said his Grandma sang it to him all the time growing up.  I reacted by saying, “what, do we have the Carter Family Singers with us now?”  I don’t know what made them come to my mind. I had no idea who sang Greg’s Grandma’s favorite song.

A few days later, in a text message exchange, Greg told me to always stay on the Sunnyside. I decided to reply to him with a link to the song. I went to look up the song, and much to my surprise.  The most popular version of the song on Spotify is sung by none other than the Carter Family Singers. Somewhere in my life, I had learned this less-than-interesting trivia. Now, when it came back up, I could recall the information without even knowing I knew it.

It drove home the point with me. I need to make sure I give credit to others whenever I can, and if I’m not sure where it came from, I should be careful before I take credit myself. There is very little chance I invented the phrase or idea.