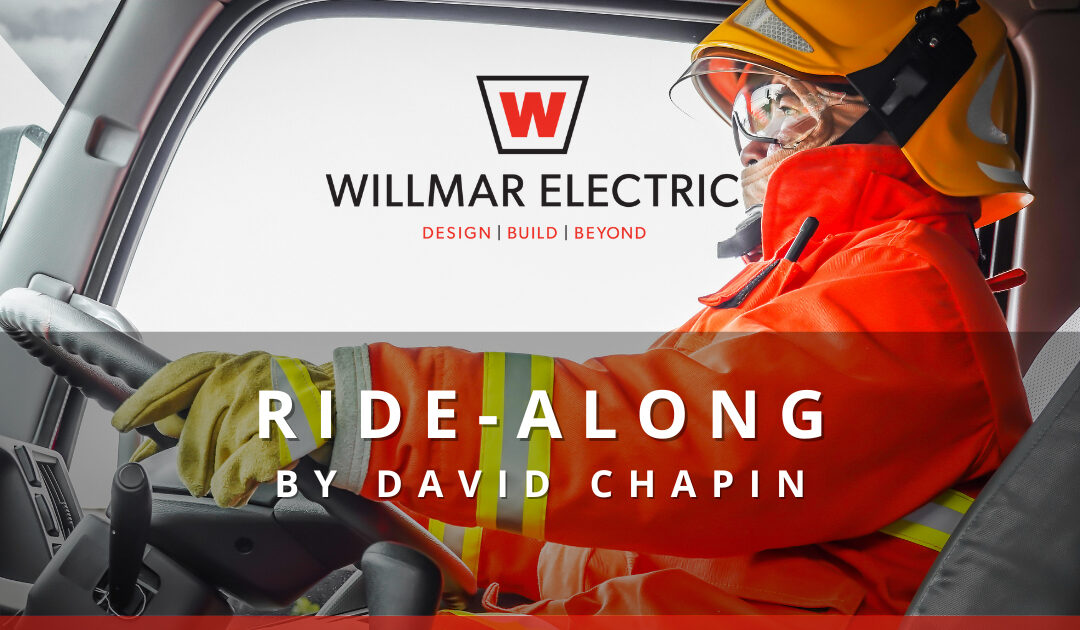 I was asked to serve on the Lincoln Fire and Rescue (LFR) stakeholders committee a few months ago. Part of serving involves spending a day riding with one of the companies from LFR. Last week I spent 10 hours with the people who serve at stations 1 and 8.

Station 1 is located just east of downtown Lincoln. Station 8 is currently closed to be rebuilt, so they live, eat, work and dispatch from Station 1.

The firefighters and medics treated me wonderfully. They answered all my questions. All 157 of them. After spending 10 hours with them, I will never be the same.

Before my ride-along, everything I knew about how a fire department worked came from conversations with my Great Uncle Frank and having an office across the street from the old fire station 10 in Lincoln.

I went into the day assuming I wouldn’t blog about my experience, but now that it is done, I can’t help myself. I need to pass along what I learned on my ride-along

I learned basic things like how the shifts work, what a firefighter does between calls, and the difference between a fire truck and a fire engine. (A fire truck is a mobile toolbox with a ladder on top, it holds no water and doesn’t even have a hose. A fire engine is a mobile fire extinguisher that holds about 2 to 3 minutes’ worth of water and 700 feet of hose.)

I learned something that might be up for debate. For example, I learned the “B” shift is superior to the “A” and “C” shift in every way, and a former division II athlete named Marcus was a step slower than Austin in the 40-yard dash. I learned they are great cooks. The shepherd’s pie I had for lunch was so good that I was tempted to skip dinner with my wife to have burgers with my new-found friends.

But when they asked me what surprised me the most, it was obvious.

When the ambulances go out in Lincoln, they also send out a fire engine. I can’t count the number of times people have cited this practice as government waste and a source of slowing traffic. But during my ride-along, I went on six calls, and when we got to our appointed destination, I found out why they needed a fire engine on the scene. It opened my mind and then changed it.

I’m not going to get into any details because the calls are a private matter, and my point here isn’t to tell you what the staff on LPR does at each stop. I can tell you that almost every time, all six people (two from the ambulance and four from the fire engine) played a role in helping the people in need. None of the situations could have been handled as quickly by only two people. Plus, the citizens of Lincoln pay them all regardless of whether they are on a call or back at the station.

Watching them handle a medical call completely changed my views.

I knew speed was paramount in firefighting and expected the crews to jump into action. What I experienced was people working at the highest level of professionalism. The firefighters abruptly stopped what they were doing but went on all their calls without giving me a sense of chaos. Conversations stopped mid-sentence, training session ended without notice, but it was never the disorganized mess I’m used to seeing on TV. I never got the impression that it was time to panic. I got the feeling it was time to get to work. When the call required sirens and going through red lights, they drove with a level of caution that got us to the call ASAP, but at the same time, we didn’t put anybody else in danger.

Spending a day at the fire station changed me in several ways. Most notably, it changed the speed at which I will make up my mind about how other industries should do their jobs. I’m not a firefighter. I never will be a firefighter. Spending one day as one doesn’t make me an expert.

The ride-along taught me to stick to my lane when a question arises about how people do their job.  I will keep asking questions, and when people can’t answer my questions, I will probe a little deeper, hoping they will self-reflect more.

People can make a legitimate suggestion to people from the outside, but before I agree with a known expert who tells me how they concluded on a subject outside their expertise, I will ask them how they came to that conclusion.

I’m already looking forward to my next ride-along.  I’m just not sure I should be hoping for a fire.